I just left a man I was madly in love with.

The first time we kissed, I felt a warmth in my heart that rushed to my fingertips, like sunlight injected into my veins. The nourished blood flowed into my brain, yet my mind was devoid of all thought. My spirit was connected to something familiar – someone I had known my entire life – anticipating that very instant when we were finally reunited.

He was my soulmate.

We had a beautiful relationship. We had fun. We laughed. It was a healthy partnership, built on respect and trust. He was not the jealous type. He valued my independence and strength. He encouraged my ambitions. He was thoughtful and compassionate (a welcome departure from my other asshole boyfriends).

I was in the throes of residency, a grueling and intense postgraduate medical training. I worked weekends and nights often, thus dating (not to mention raising an infant) was a challenge. My time was extremely limited, but it didn’t matter to him; he understood and was supportive.

He would visit me on the quiet and isolated nights in the cold hospital. In my wrinkled pair of oversized scrubs and a pager on my waistline, I worked through answering pages and calling nurses, sipping my favorite hot chocolate which he had brought me. The thick, bittersweet liquid and his patient smile warmed my heart.

Those were some of my fondest memories I have of that time, knowing I wasn’t alone. My life revolved around caring for others, yet here was someone who wanted to take care of me, even during the darkest moments of my life.

We had only been dating a couple of months when I was served the papers that triggered a dramatic and exhaustive custody battle. Most men would have been overwhelmed with it all – residency, raising an infant, and now baby daddy drama – but he fought alongside me.

He grew close to my daughter, loving her as his own. Sunday mornings at her awakening cry, he would place his hand on my shoulder, gently pressing me back into the mattress and whisper, “You sleep. I can watch her.”

He and my daughter were my world.

I never thought I could feel and give so much love. I was ready to weave our lives together. We moved in together. And for a brief moment, we were a normal and happy family.

Except he had a secret: he was in love with something else.

He was in love with what he could achieve, with who he could become, with how his future would be his legacy.

His ambitions were admirable. We shared the same passion for serving others and making the world a better place. But he wouldn’t be happy or fulfilled until he achieved his dreams and left a lasting legacy. He wouldn’t be happy until he had proven himself.

He said he only wanted to be a family and a father after he had realized his dreams.

So he made sacrifices. Our time together was often spent working alongside each other, not with each other. The treasured afternoons in the parks felt hurried. His attention was usually divided. He became more absent and more distant. His priority was the future.

But in the future, I would have everything I wanted from him as a partner. So I made sacrifices too. I could wait.

In the future, I wouldn’t have to be a single mom anymore.

I wouldn’t have to feel the chilling ache of loneliness, or the burning envy towards complete families.

I wouldn’t have to raise my child alone. I wouldn’t hear the penetrating voice of self-doubt as a good mother.

I wouldn’t taste the bitter angst of watching my daughter grow up without a father.

And I would have someone to share the magic and wonder with.

Someday, I would have that happiness.

Someday, when he finished business school and began his company, when he had enough money or enough success, he would be happy. Someday, he would make sacrifices for us instead.

We were waiting for “someday” when there would be enough.

Until it dawned on me.

It will never be enough.

“Someday” never comes, because a reality built on “not enough” perpetuates a life of “not enough.” It is a never-ending cycle. There is no happiness, or fulfillment, or “enough” in the future.

There is only how we feel now.

And now was the time to act.

The gravity of the decision was crippling.

Leaving him meant completely starting over. It meant breaking my own heart.

But a single mantra echoed in my mind:

What do you deserve now?

Are you a prisoner of your future? Or will you give yourself the most wonderful gift of today: the present?

I left. And it was liberating. I no longer had to fight. I surrendered myself to uncertainty. I was as unbreakable as ever.

You have the resources you need to create the life you want, or at the very least to get started.

You are enough. You have enough.

All you wish to be is manifested by your present actions, by how you live this very moment.

There is no waiting. There is only doing.

Do you want to be Unbreakable? Live a life of enough starting now.

Why Every Mom Should Do A Topless Mother Daughter Photoshoot

Why did I do a topless mother daughter photoshoot? When you see your body in [...]

Are You Really A Good Single Mom? Take This 1 Minute Quiz To Find Out!

Be EMPOWERED as a single mom.

– Take control of your life

Unleash your Unbreakable Mom Superpowers with your 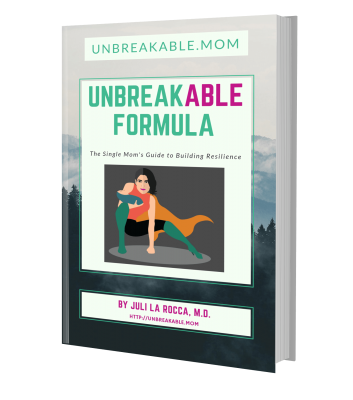 Get the Unbreakable Formula and weekly inspiration from Dr. Juli